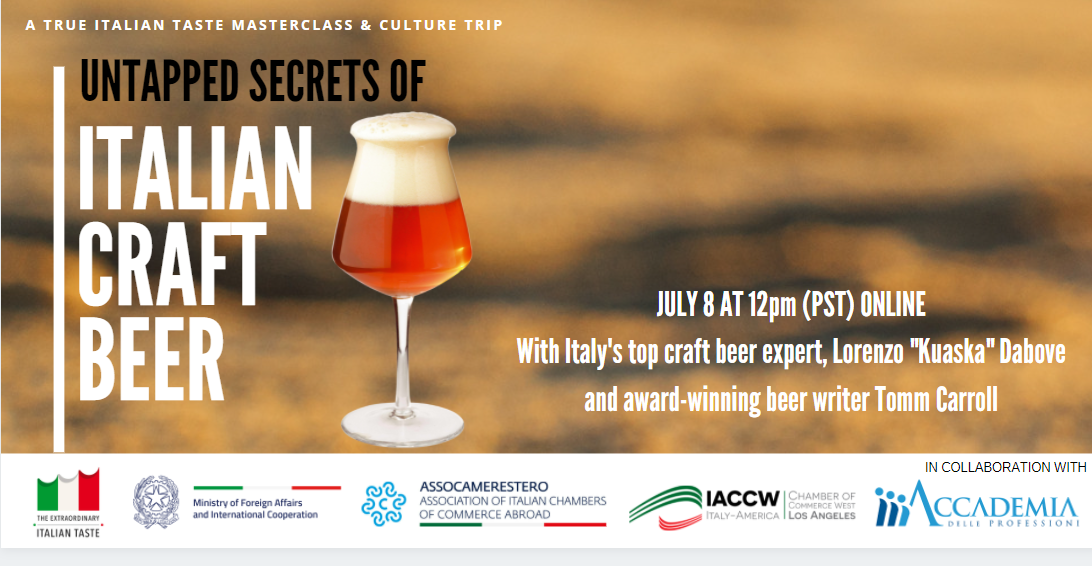 A True Italian Taste Masterclass exploring the originality and creativity of Italian brewers and learn the key steps of beer tasting.

Italy is famous all over the globe for its artful influence on culture, which is revealed in many fields, such as fashion, design and - above all - great cuisine and world-class wine. However, not everyone knows that over the past 25 years, Italy has gained a highly respected reputation in the production of craft beer, or birra artigianale. This True Italian Taste masterclass will reveal the exciting story of the craft beer revolution, which was fomented in Northern Italy in 1996 by a handful of pioneer brewers, and continues to the current day with innovative experimentation yielding even more exciting results. Akin to a terroir - Italian craft brewers’ intimate relationship to their land, through the use of local ingredients - these beers possess distinctive aromas and flavors, thanks to the sensational biodiversity of their homeland. Through an engaging presentation, participants will be able to appreciate the imagination, originality and creativity of Italian brewers, and will learn the key steps to follow to taste a beer, and hopefully will seek out some birra artigianale to experience it for themselves!

Lorenzo "Kuaska" Dabove is a professional beer taster, expert, teacher, judge and writer. Lorenzo has been the Cultural Manager of Unionbirrai in Italy from 2001 to 2009. He is currently the Cultural Manager of the MoBi (Movement of Beer Consumers) which he co-funded in 2009 and a Member and taster of CAMRA (Campaign for Real Ale). Lorenzo is a leading fighter in preserving traditional lambic and gueuze with his "putative father" Jean-Pierre Van Roy of Brasserie Cantillon in Anderlecht. A judge in the World Beer Cup since 2004 and in all main International competitions including Great American Beer Festival, Lorenzo has also recently assumed office as the President of the Scientific Technical Committee of the Academy of Professions in Padua, Italy. Of Ligurian origin, he lives and works in Milan and Genoa.

Tomm Carroll is a veteran beer journalist with 20 years experience, Tomm Carroll is a senior contributor and historian for Beer Paper in Los Angeles, where he is based. He has written for Celebrator Beer News, Los Angeles Times and Ale Street News, among others. Tomm is a BJCP-schooled international beer judge of more than 40 commercial and homebrew competitions and teaches a craft beer class at UCLA. He was one of the original organizers of the 12-year-old LA Beer Week, for which he still organizes and moderates educational panels. A member of both the North American and British Guilds of Beer Writers, CAMRA, the American Homebrewers Association, and the Culinary Historians of Southern California, he is working on a book on the early days of Los Angeles breweries.

True Italian Taste is a campaign funded by the Italian Ministry of Foreign Affairs and International Cooperation, led by Assocamerestero, in collaboration with the Los Angeles-based Italy-America Chamber of Commerce West (IACCW).

This Masterclass is a joint collaboration between the IACCW and Accademia delle Professioni.

Login to RSVP for this event or RSVP without logging in.